Thanks to Visit Anaheim
Take 5, an all-new series, highlights some of the best things to do and see in Anaheim outside of the convention center. In celebration of the NAMM Show this weekend, we’re kicking off the series with the best live music spots in Anaheim! 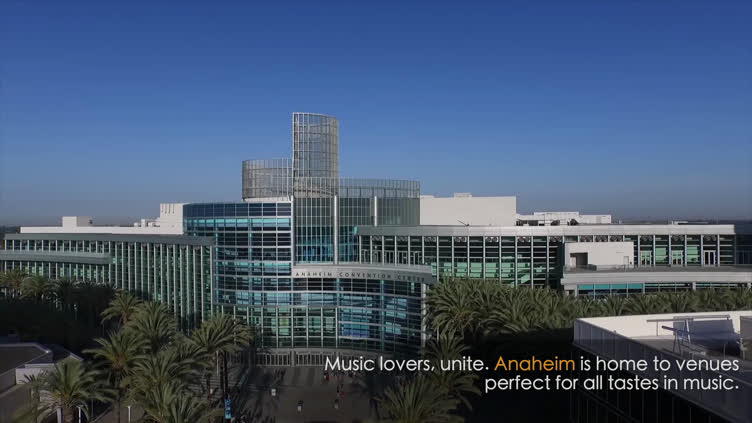 These separately ticketed evening events grant you special access to either Disneyland or Disney California Adventure park after closing. Select attractions will also remain open exclusively for event guests, usually with shorter wait times! In addition, you’ll receive unlimited digital downloads of Disney® PhotoPass photos taken during the party to capture all of your Disneyland® After Dark memories.

Tickets can be purchased at our Disney® Desk located in our lobby beginning December 4, 2019. These events sell out quickly and therefore the Disney® Desk can be a unique opportunity to purchase Disney® After Dark tickets for packaging purposes.

Visit Disneyland.com for more details and pricing for these Disneyland®  After Dark events. Parking fees are not included in the ticket price. A limited quantity of tickets for each event will be available.

News
16 Awesome Hidden Gems You Must Experience At Disneyland® Resort

According to this thread on Quora, there are some hidden secrets you should look out for on your next trip to Disneyland® Resort.

1. Look for Walt Disney’s® light at the Main Street firehouse — the light that never goes out.

"Walt Disney® had an apartment above the Main Street firehouse which he used with his family regularly. After his death, the light in the window which used to signal his presence in the park was, and still is, left on at all times." It is completely unchanged from the time Walt and his family lived there. (source: Quora)

2. Ask for the special tender seat on the Disneyland® Resort railroad.

Approach the conductor at Main Street Station and ask if you can ride it. Once the next train comes, you'll be escorted past security to the front of the tender where there is a special (albeit small) seat for two.

3. Go see the park bench where Walt Disney® originally conceived of the idea of Disneyland® Resort.

In the foyer of "Great Moments with Mr. Lincoln," there is a park bench where Walt came up with the idea while watching his daughters play. This is the Griffith Park bench, and nearby is one of the actual carousel horses that his daughters used to ride.

4. If you ask nicely, you can ask to pilot the Mark Twain Riverboat.

You'll be directed to the wheelhouse, where you'll be allowed to steer the boat (which is on a track) and blow the whistle. You'll even get a special certificate afterward.
(source: Quora)

5. When the park first opens, go to the Main Street Station and ask for a reservation to ride in the Lilly Belle train car.

"This train car is named after Walt's wife, who helped design it. It is lavishly decorated." Can you believe they'd let a schmuck like you ride Lilly Belle's train car??
(source: Quora)

6. Ride in the purple teacup in the Mad Hatter ride — it spins the fastest.

If you want to get extra dizzy.

7. If you try on a hat in the Mad Hatter gift shop, you might glimpse the Cheshire Cat in the mirror.

8. Look out for Walt and Roy Disney’s® initials, which are formed in the wrought-iron railing above the queue to the Pirates of the Caribbean.

9. For the adventure-seekers: Employ "the Goat Trick" for an extra-thrilling ride on Big Mountain.

Once you get to the second hill (the one with the snakes), start looking for the Billy Goat, who should be raised up on your right. Stare the goat down and don't take your eyes off of him. You'll experience a dizzy, disorienting feeling that will make the ride even more exciting.

10. There are two fun interactive things you should do at Indiana Jones.

1) Do the opposite of what the sign says and pull the bamboo pole. There will be a loud booming noise and it will seem as though the ceiling is caving in.

2) Do the opposite of what the sign says and pull the rope. It makes an unseen worker "fall" and voices will cry out from the well.

11. For a cool souvenir, ask for a death certificate when you enter the Haunted Mansion.

"Ask the host/hostess when you enter the foyer, and if you're lucky they'll tell you to come back to the front of the HM after your ride and they'll have 'em there waiting for you."

12. Listen for the hidden sounds.

• On the right side of Main Street, go into the alley where the ice cream stand is, and if you listen carefully, you can hear such conversation as a dentist drilling his patient.

• You can hear a voice paging an "Egroeg Sacul" in the queue for Star Tours, which is George Lucas spelled backward.

• You can hear a voodoo lady above the restrooms that are near the New Orleans Square train station.

• Near the New Orleans train station, you can also hear the dot-dash-dot of a telegraph relaying in Morse code the opening lines of Disney’s® speech at the opening day of Disneyland® Resort. (source)

13. When you're getting off the Jungle Cruise, ask a cast member for a free map.

It makes a great keepsake for a child

14. If you touch the apple at Snow White's Scary Adventures, the queen will laugh maniacally.

15. In one of the buildings in Fantasyland above the Snow White attraction, the Evil Queen appears in a window for only a few seconds every few minutes.

When it first opened, there were human skeletons galore. Now, there's only one remnant left of human remains — the skull and crossbones located over the bed in the Captain's Quarters.

Disneyland® Resort
An iconic landmark in Anaheim, the Disneyland® Resort is an adventure for all ages with attractions across two theme parks, creative food and drink options, and unique shopping opportunities. The latest additions include the much-anticipated Star Wars Galaxy's Edge land inside Disneyland® Park and Black Tap's infamous over-the-top milkshakes at Downtown Disney®.

Anaheim Packing House
This trendy food hall helped put Orange County on the map for inspired global eats. It continues to be ahead of the culinary curve with a continuously refreshed lineup of food stalls that includes Indian flavors, Japanese crepes, Hong Kong barbecue and the Blind Rabbit speakeasy bar.

La Palma Beer Trail
Visitors will never go thirsty in Anaheim, which is home to nearly half of Orange County's 35-plus craft breweries. Take a self-guided tour along the La Palma Beer Trail, a 5-mile stretch boasting eight breweries and dozens of varieties on tap.

House of Blues® Anaheim
Savor a southern-inspired dinner or the signature Gospel Brunch at the flagship House of Blues® location. In addition to having one of the largest American folk and outsider art collections in the world, the venue is known for its multistory music hall.

Anaheim Ducks®
Things heat up whenever the Anaheim Ducks® take the ice at the Honda Center. The Orange County team will deliver action-packed excitement once the regular season kicks off in October.

SoCal Day Trip
South of Anaheim, discover the charming beach communities of San Diego; to the north, Los Angeles beckons with landmarks like the Getty Center, Venice Beach and the Hollywood Walk of Fame. Visitors can enjoy a self-guided day trip or book an immersive tour offering round-trip transportation from Anaheim.

FlightDeck Flight Simulation
Adrenaline junkies can take control of their next adventure in a true-to-life fighter jet simulation. Streak through the air at 600 knots, evade enemy combatants and practice advanced combat techniques.

A View Only in Anaheim
Catch Disneyland®’s epic fireworks spectacular from an unparalleled vantage point. The Fifth at the Grand Legacy at the Park is the city’s only rooftop bar, with lounge seating, fire pits and a curated menu of late night bites and artisanal cocktails.

News
Top 10 things to do this summer at Disneyland® Resort just 1.4 miles away from the hotel

This summer Disneyland® Resort is sure to be a cool place for hot experiences! Explore new adventures, watch new shows, meet new Disney characters, plus experience a new land – Star Wars: Galaxy’s Edge. Here are the out-of-this-world opportunities your Guests can enjoy:

Travel to a galaxy far, far away – The epic new land, Star Wars: Galaxy’s Edge, opens May 31, 2019 with new experiences for your Guests to live their own Star Wars adventures. They can explore a remote planet full of unique sights, try galactic food and beverages, and shop the intriguing collection of merchants. Plus, they can take the controls of the most famous ship in the galaxy aboard Millennium Falcon: Smugglers Run.*

Admire Sleeping Beauty Castle – After an extensive refurbishment, the beloved icon at the heart of Disneyland is back and more beautiful than ever. The castle truly shimmers with enhancements, new color tones and of course, pixie dust.

Enjoy “theater” in the night sky – “Disneyland Forever,” the captivating fireworks spectacular returns June 7, 2019, showing just how magical the magic kingdom can be. The sky-high celebration features sparkling pyrotechnics, immersive projections and other effects that transform Disneyland into a magical canvas.

Boost to Hyperdrive – Hurtle through hyperspace on Hyperspace Mountain! For a limited time this summer, the high-speed Star Wars-themed overlay brings a galactic adventure to Space Mountain in Tomorrowland.

See and hear the “Tale of The Lion King” – Beginning June 7, 2019, an imaginative new adaptation of “The Lion King” is presented as a highly theatrical, outdoor musical production.

Play in Pixar Pier – Celebrating its first anniversary in June, Pixar Pier is a whimsical land where the stories and characters of Disney and Pixar films come to life in incredible, playful ways. Your Guests can enjoy the newly reimagined Jessie’s Critter Carousel, as well as Inside Out Emotional Whirlwind, opening soon!

Sit back and enjoy the show – The spectacular magic of Disney animation comes to life in the 3D movie musical “Mickey’s PhilharMagic.” Mickey Mouse, Donald Duck and other favorite Disney characters take the stage in this fantasy adventure in the Sunset Showcase Theater.

Strike an epic pose – Super Heroes are landing in Hollywood Land to meet their newest “recruits!” Come face to face with some of the most admired heroes in the universe, including Captain Marvel, Spider-Man, Captain America and Black Panther.

Take flight over California – The epic, aerial adventure Soarin’ Over California returns from June 1 to 30, 2019! This virtual tour celebrates the beauty and wonder of the Golden State—from San Francisco’s iconic Golden Gate Bridge to the crashing waves in Malibu.